Gilberto Raul Valiente Jr was born on October 24, 1987 at Jackson memorial hospital in Miami Florida.  Gilberto  grew up in little Havana Miami Florida. For as long as he could remember he lived in a duplex at the back of his grandparents’ house where every morning he woke up to parakeets chirping. It was at this same house where one his mother and father were outside talking when a drunk man with a load weapon approaches Gilbertos parents demanding money. Gilbertos father immediately springs toward the man and begins to struggle for control of the weapon when a shot is fired. At this time Gilbertos mom was pregnant with him and due to lack of money at the time propane tanks where ideal for stove cooking. The bullet nearly missed the right side of her stomach and nearly missed the left side of one of two five foot propane tanks. The crime rate seemed to have slowed down toward the end of the eighties in Miami.This was also the same house where Gilberto and his family survived hurricane Andrew.  At a young age Gilberto started to take notice in music. Every festive holiday his family would play salsa and merengue. 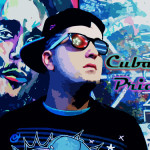 They would dance for hours after eating Cuban style plates such as seasoned steak plantains white rice black beans and avocado washed down with the traditional rum and coke or occasional president beer. It was a must that gilberto learned how to dance because that was a big part of the culture and the better dancer you were the more popularity you would have at these parties.

Gilberto also acquired an ear for reggae music at a very young age. Olga Gilbertos mother would get together with some of her friends and their children and go to a place called Montys in coconut grove Miami. It is a sea food restaurant right next to a boat marina that had live performances by local and famous reggae artists. Gilberto would run around the dance floor and dance foolishly to covers of bob marleys songs like could you be loved and rock steady. Now A days in Gilbertos or G Braves music Bob Marley is a huge influence.  8th grade  along came skateboarding.